Betsy DeVos is right that boys can’t be girls

The grandparents of “Doomsday” dad Chad Daybell‘s stepson wept in court Monday as a detective described finding the 7-year-old’s remains bound like a mummy in duct tape and plastic in a pet cemetery.

Ray Hermosillo, a cop from Rexburg, Idaho, said he and other investigators began digging on Daybell’s local rural property on the afternoon of June 10 after seeing a suspicious mound of freshly laid sod.

There were three white stones eerily lined up in a row directly under the patch of sod, as well as a thin piece of wood paneling the cop testified.

The stench that hit the officers as they began digging was overwhelming, he added.

The cops quickly found “a black, what I can best describe as a plastic bag with a round object protruding through the dirt,’’ said Hermosillo — who took the stand at a preliminary hearing for Daybell to determine whether his case would remain in state court.

“It appeared to be a small body, tightly wrapped in black plastic, covered in duct tape,’’ the officer said — adding that Joshua “JJ” Vallow was dressed in red pajamas and black socks with the brand-name “Skecher” written across the toes.

Daybell and wife Lori Vallow Daybell are accused of concealing evidence by hiding the bodies of JJ and his 17-year-old sister, Tylee, who was Lori’s biological daughter with an ex-husband, on a section of his property where he also buried dead pets, including a cat and dog. 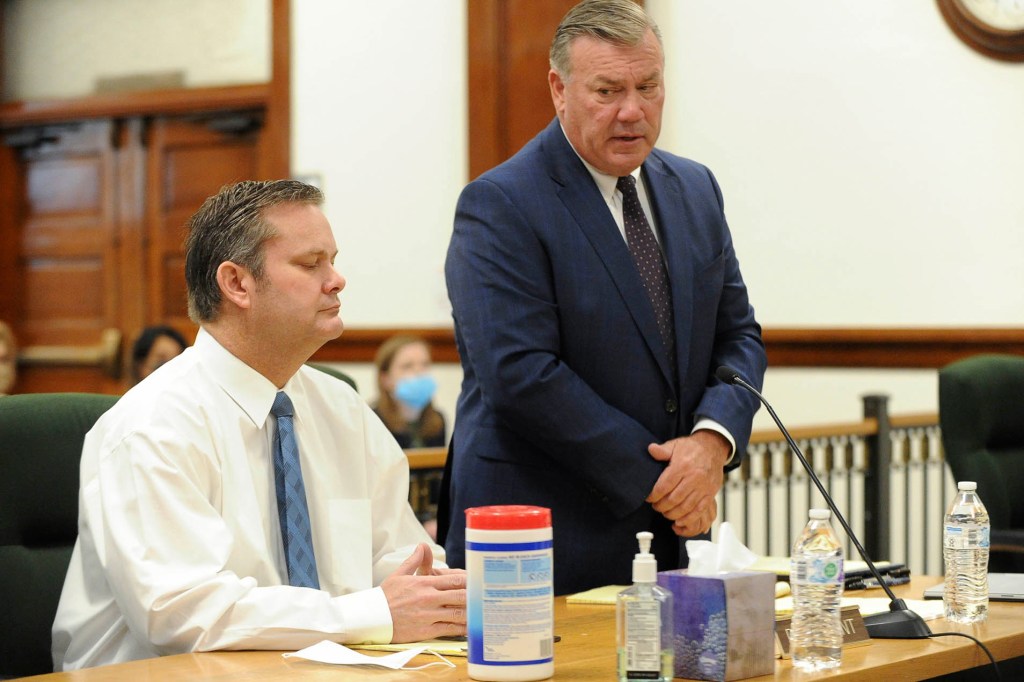 
A Black Lives Matter protester carrying a flamethrower led a…

Daybell has written books and spoken on podcasts about the supposed upcoming of the Apocalpyse — and he and his wife allegedly believed in evil spirits, or zombies, that could possess people.

One of Lori’s pals has said the mom repeatedly told her last year that JJ and Tylee had become “zombies’’ — and that the only way to get rid of an evil spirit was to kill the possessed person.

In court for the proceeding were JJ’s biological grandmother, Kay Woodcock, and her husband Larry Woodcock — who burst into tears listening to Hermosillo’s testimony. Kay is the sister of Lori’s late fourth ex-husband, Charles Vallow. Lori and Charles had adopted JJ in 2014.

The investigating detective said JJ’s body was found in “shallow” grave, about 6 to 8 inches deep, in the patch of the pet cemetery with a statue of a dog near it.

“A white and blue blanket … had been placed across the top” of the body, the cop said.

But he said what most caught his attention was “the amount of duct tape that was covering the body, on the head, on the arms and on the feet.

“The head had a white plastic bag on top of it. It appeared to be a regular white trash bag,’’ the officer said.

There was duct tape around it “from his chin to his forehead area. Several layers of duct tape wrapped tightly,’’ Hermosillo said of the little corpse.

When the bag was removed, an “additional piece of duct tape was stretched from jawline to jawline across the mouth,’’ the detective said.

“His hands were folded about chest high. He had duct tape continuously wrapped from his elbows all the way around his arms to his hands. Several layers of duct tape,’’ the cop said of JJ.

As for the child’s hands, “The best way I can describe it is he had a ball of duct tape over where [they] would be.

Betsy DeVos is right that boys can’t be girls

New government figures show that the unemployment rate in August was highest in Nevada, lowest in Nebraska, and falling month-over-month in all states except...
Read more
U.S News

A firefighter in California died in the El Dorado wildfire, which is believed...
Read more
U.S News

Stocks are down for the 3rd week in a row - yeah we know!!! - leaving levered-call-buying RH'ers facing something they likely haven't seen...
Read more

Despair in Lebanon pushing some to flee to Europe in boats

Georgia man says he couldn’t breathe during arrest on video