Welsh Man Arrested, Claims He Was Strip-Searched For Going For A Walk Too Far From Home

Ukrainian Diplomats Arrested For Attempting To Smuggle Gold Into EU

The Latest: Austria, Denmark to work with Israel on vaccines

President Joseph R. Biden Jr. promised unity and hope to a deeply divided nation as he became the 46th president of the United States on Wednesday.

“We must end this uncivil war,” Biden said.

His speech was a call to action. He told the country it will overcome what he called “this dark winter,” and pledged that “We will get through this together. Together.”

He spoke under clear, cold and blustery skies before a small group seated in lawn chairs, plus nearly 200,000 flags, which had been planted to represent the people who could not attend due to the COVID-19 pandemic and the extreme security measures put in place.

Biden’s swearing-in passed peacefully, thanks in part to the presence of 25,000 National Guard troops and a lockdown of the downtown area of the nation’s capital.

In the end, the event was a celebration of democracy, with speeches laced with undertones from past presidents Abraham Lincoln and Franklin D. Roosevelt. But the violence of Jan. 6 was never far from the new president’s thoughts.

“This is democracy’s day,” Biden said. “America has been tested anew and America has risen to the challenge.”

Quoting Lincoln’s remarks about signing the Emancipation Proclamation, Biden added: “My whole soul is in this: Uniting our nation … and I ask every American to join us in this cause.”

He promised to be a president for all, including the nearly 75 million who voted for now former President Donald Trump — and even the tens of millions who said in recent polls they still do not accept the result.

“We celebrate not a candidate, but a cause,” Biden said. “Democracy is precious. Democracy is fragile, and at this hour, my friends, democracy has prevailed.”

Trump had arrived in Florida an hour before Biden’s midday address, after bidding farewell to supporters at Joint Base Andrews in Maryland.

The outgoing president claimed credit for rebuilding the military, taking care of veterans, his many judicial appointments, a soaring stock market and an economy he called “a rocket ship,” tax cuts, and the “miracle” of delivering vaccines within a year for what he still calls “the China Virus.”

In his final speech as president, Trump blended a more subdued approach into his regular bombastic style.

“I wish the new administration great luck and great success. I think they’ll have great success,” Trump said. “They have the foundation to do something really spectacular.”

Amid chants of “Trump, Trump, Trump” and “USA, USA, USA,” the outgoing 45th president signed off by telling supporters: “I will always fight for you. I will be watching. I will be listening. And I will tell you that the future of this country has never been better.”

Among them, he has promised to halt the construction of the former president’s “border wall”, reverse his immigration policies, restore U.S. participation in the Paris climate agreements and in the World Health Organization, and to end travel bans from predominantly Muslim countries.

Biden throughout his campaign for president had promised to reengage in the world, to lead by example, treat the threat of climate change seriously, and honor the truth.

Biden inherits narrow working majorities in the Senate and also the House of Representatives, where more than 140 Republicans voted to challenge the results of his election victory, even after none of Trump’s legal challenge stood up in court.

He also takes office as the Senate decides again whether to convict Trump on impeachment charges leveled by the House, with many Republicans still complaining impeachment was itself a divisive act.

Biden has expressed ambivalence to the idea.

And he inherits a Democratic Party with a powerful liberal wing calling for faster and bolder reforms on racial and criminal justice — and on the environment — than what Biden promised.

Against that backdrop, federal law enforcement agencies also continue to untangle any conspiracies behind the Jan. 6 attack and after they warned of political violence around the country. None materialized Tuesday, though there had been reports of a bomb threat at the U.S. Supreme Court before the ceremony.

A group calling itself the Patriot Party tweeted in the last hour of the Trump presidency a list of what it termed “traitors”, naming Republican lawmakers. 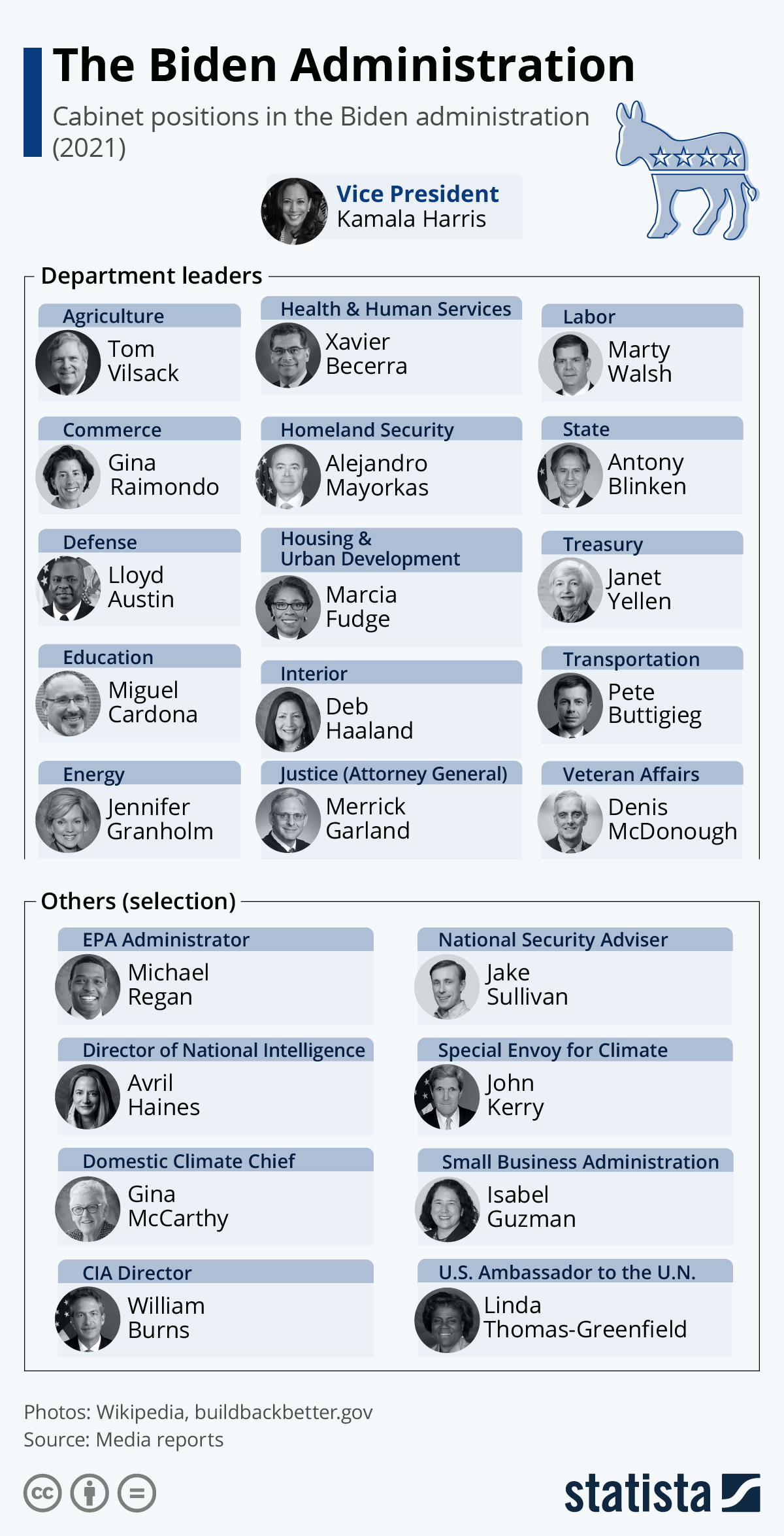 You will find more infographics at Statista

But even though he led much of the challenge to the election, McCarthy also congratulated Biden and Vice President Kamala D. Harris, adding: “Now we must get to work to solve the challenges facing our county. We all are Americans and together we will succeed.”

After the inaugural speech, McCarthy presented Biden and Harris framed photos of their swearing-in, telling them “I’m very proud of you both.”

Outgoing Vice President Michael R. Pence, who snubbed Trump’s farewell to attend the inauguration, shared a moment of levity on the Capitol steps with Harris, as she bid him farewell.

“This flag flies over this capitol on triumphant days and on tragic ones for all factions and parties,” Sen. McConnell said, calling the gift “a symbol of hope and healing and for all your enthusiasm for our country.”

For their part, Democratic leaders were thrilled. House Majority Leader Rep. Steny Hoyer, D-Md., told Biden he was “ecstatic,” moments before he saluted him.

Perhaps the mood of the nation was best captured by Amanda Gorman, who made history as the youngest poet laureate to read a poem at an inaugural ceremony.

Reading from her poem “The Hill We Climb,” she recited: “We will raise this wounded world to a wondrous one.”

“We lift our gaze not to what divides us, but what’s before us,” Gorman said.

Welsh Man Arrested, Claims He Was Strip-Searched For Going For A Walk Too Far From Home

Authored by Paul Joseph Watson via Summit News,A man in Wales was arrested by police for going for a walk too far from home...
Read more
U.S News

Ukrainian Diplomats Arrested For Attempting To Smuggle Gold Into EU

Ukrainian border guards arrested Ukrainian diplomats who attempted to smuggle hundreds of thousands of dollars worth of goods - including gold, cigarettes, and foreign...
Read more

Global Bodies Went Off the Rails When They Scrapped Ozone, Targeted Carbon Dioxide

Some of us old timers who grew up in Southern California recall the inversion layers of particles in the valleys that trapped smog.  ...
Read more
Politics

New York Gov. Andrew Cuomo continues to fight back against allegations of sexual assault, pleading with Americans to wait until an investigation is conducted...
Read more
Politics

The National Shooting Sports Foundation (NSSF) warns that gun control targeting the so-called “Charleston Loophole” could be before Congress for a vote as early...
Read more
Politics

President Joe Biden’s border security chief is launching an “all-of-society effort” to help some of the Central American migrants who left their kids in the...
Read more
Politics