The Optional Practical Training (OPT) program foreign employee program is shifting many billions of dollars and hundreds of thousands of jobs from heartland communities over to wealthy Democrat-dominated coastal states, according to data touted by advocates of the program.

The program allows roughly 500,000 foreigners each year to get taxpayer-subsidized jobs after enrolling at U.S. colleges.

Those 500,000 OPT employees are much cheaper to hire than American graduates, partly because many foreigners will work cheaply to help them get green cards from employers but also because they are exempt from paying taxes on Social Security and Medicare.

But the programs also boost the stock values of many high-tech investors and CEOs — and they are fighting hard to persuade Trump to let them keep their huge supply of cheap OPT workers.

In 2019, the pro-OPT Niskanen Center provided a detailed report about the OPT employees, based on data provided by the Department of Homeland Security. (The DHS administers the spending-and-jobs program because it was created by White House administrations, not by Congress).

The Niskanen numbers show the program is strongly skewed in favor of investors and universities in coastal Democrat states and against heartland states, companies, and employees.

Universities and colleges say OPTs pay roughly $41 billion in tuition fees each year. The Niskanen report shows the 25 universities with the most OPT beneficiaries between 2003 and 2017. Of that top-25 group, 72 percent went to five states with two Democratic senators — California, New York, Illinois, Michigan, and Massachusetts. In contrast, roughly 21 percent went to double-GOP states —  Texas, Indiana, and Florida. That is a three-to-one skew.

Niskanen showed that 86 percent of the 2017 OPT employees reported where they went to work.

Pennsylvania picked up 2.5 percent, leaving the other 38 states with an average of 0.5 percent share of the OPT workers.

Universities lobby a Microsoft exec in Trump’s WH to protect the ‘OPT’ cash-cow created by Microsoft in 2007.
The Optional Practical Training program allows 300K++ foreigners to buy work permits via colleges, so denying good starter jobs to US grads#H1Bhttps://t.co/6B0WJ6Sdpd

The dollar value of the OPT skew is uncertain, but it is certainly large.

If each OPT employee costs $20,000 less than an equivalent American, the Niskanen report suggests that the White House OPT program annually provides a cheap labor stimulus of $2.8 billion to Democrat states.

“Why do Republicans support a policy that creates jobs in Democrat states by taking jobs from GOP states?” said John Miano, a lawyer at the Immigration Law Reform Institute. “Can no-one figure this out? … They don’t call it the Stupid Party for nothing.”

The Democrats, the establishment media, and the tech companies “are taking the rubes for a ride,” he said.

More details are provided in a May 2020 report by a pro-OPT university coalition, the Presidents’ Immigration Alliance.

The precise numbers are unclear because roughly one-in-seven of the OPT employees did not say where they worked. Also, the program includes a significant amount of fraud. But the Alliance numbers show that:

GOP Sen. Mike Lee’s Utah was not on Niskanen’s list, despite his state’s hardcore push for passage of the S.386 bill, which helps foreign workers get citizenship by jumping from OPT to the H-1B program.

But these numbers understate the scale of the OPT program — and the hidden subsidy to Democratic states.

The pro-OPT President’s Alliance reported the huge scale of the program:

2018 Total Number of SEVIS Records with Authorizations to Participate in CPT, OPT or STEM OPT

The cheap-labor program is huge because many of the foreigners are given “STEM-OPT” permits to work for almost three years. They can get the three-year permit once a secretive panel at DHS decides that their coursework — such as accounting — can be related to technology.

For example, from 2008 to 2018, roughly 11,174 foreign “STEM-OPT” students were hired for up to three years by Amazon, Intel, Google, and Microsoft. No Americans are hired under the OPT programs.

Moreover, many of the foreigners also get “Curricular Practical Training,” one-year work permits before they graduate. From 2003 to 2018, the four tech companies hired almost 25,000 foreign employees — but not a single American — under the CPT program.

The DHS data shows that colleges and universities are providing 500,000 cheap foreign employees to American employers each year. So if the federal subsidy is counted at only $20,000 per employee, the DHS data shows the program provides $10 billion in annual wage subsidies, most of which goes to wealthy employers in wealthy states.

The yearly subsidy adds up to $40 billion during President Donald Trump’s term in office — and most of that goes to his political enemies in a few wealthy, Democrat-dominated coastal states.

But these numbers are multiplied by the stock market. Most tech companies can raise their stock by price about $20 if they transfer $1 from payroll to profits. So if OPT shaves just $5 billion from companies’ payrolls, it adds $100 billion to their stock prices – – and several billion to the stock wealth of the C-suite executives.

Some GOP legislators are trying to use immigration to steer more cheap labor in their states, said Miano.

But that strategy is futile because the insecure OPTs and H-1Bs need jobs that help them to network with their ethnic and national peers, Miano said.

“It is hilarious – if you listen [to the GOP advocates], people are going to move to [Uah’s] ‘Silicon Slopes’…  But they have already doubled and tripled the number of visa workers, and it has not happened.”

Miano’s argument is supported by the Niskanen data, which shows the OPT workers flock to the coasts, largely ignoring the inland states. Neufeld’s data shows that 73 percent went to New York, New Jersey, California, Texas, or one of the other eight coastal states in the top 11 states. The remaining ten percent of tracked OPTs went to inland Michigan, Illinois, and Pennsylvania. 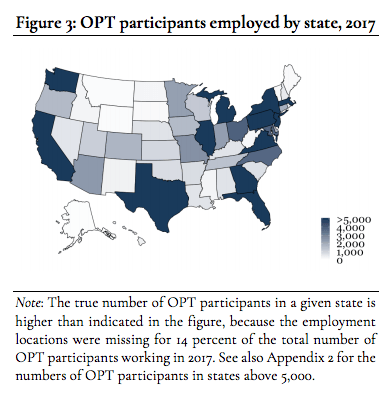 “States and localities also lose from the cheap-labor program,” said Miano, who has launched a 12-year, three-appeal, marathon lawsuit against the OPT program:

The whole immigration system effectively screws the low-wage states in favor of the high-wage states. If you take a look in the absence of OPT and H-1B, you would have employers looking at the real cost of labor — the average wage of a programmer in Silicon Valley is $160,000, while in most of the country it is under $100,000 —  and saying ‘Maybe we should move to Ohio, maybe we should go to Arkansas?’ Instead, the employers use the OPT system to get cheap labor at a discount.

Niskanen’s data shows OPTs get their jobs in the wealthiest regions, largely because the OPT program is designed to help deliver workers to the wealthy technology sectors.

For example, Neufeld’s data shows that 57.6 percent of the OPTs he tracked from 2008 to 2017 worked in ten just “core-based statistical areas,” including “New York-Newark-Jersey City,” and “Boston-Cambrdige-Newton.” Two of those wealthy areas were in the lone double-GOP state of Texas. But eight were in double-Democrat states. Four were ranked among the top ten wealthiest areas in the nation, according to the 2010 census.

The best way for the states to get a share of the coasts’ technology jobs — and their taxes — is to kill the OPT program, he said.

For governors, mayors, and employers, “the biggest way [to get tech jobs] is to take advantage of your wage differential.” Miano said.

The federal incentives for investors to stay in the expensive coastal states also ensures that heartland states lose each generation of new college graduates, Miano added. “If you are at the University of Kanas, and you have 100 computer science graduates, where will they go to work? Not in Kansas.”

Many reports show that many American graduates are sidelined by the federal government’s cheap-labor policies — and millions more are losing their jobs amid the coronavirus crash.

“Claiming there is a skills shortage by denying the strength of the U.S. STEM workforce and student supply is possible only by ignoring the most obvious and direct evidence and obscuring the issue with statistical smokescreens,” said a 2014 report by Hal Salzman, at Rutgers University. “The Census Bureau reports that only about one in four STEM bachelor’s degree holders has a STEM job,”

The OPT program is also a primary feeder for the huge H-1B visa worker program that keeps about 750,000 workers in the United States. OPT “is the main on-ramp for American companies to recruit and retain foreign talent in the United States,” Cato reported.

Many of the Texas-bound H-1Bs (and OPTs) were requested by Indian staffing companies, which normally reroute their workers to other states, such as California, Connecticut, and New York. The DHS has not released workplace locations since 2017.

Fortune 500 CEOs & VPs can happily ignore & boot US professionals b/c the execs instead hire their own army of compliant, silent H-1B visa-workers.
This economic class war is obscured by the estb media’s fangirling for ‘vibrantly diverse immigrants’#H1B https://t.co/EgkcLsf4Xm